St. Barths: A First Look at This Island Paradise

The island of St. Barths is probably not the first place you thought of when considering where to go on your Caribbean vacation. Also called St. Barthelemy,  St. Barths in English, or St Barth in French, this tiny country may not be famous, but it’s the perfect place to go if you’re looking for a true island paradise.

There’s a reason why this tiny island has become a favorite retreat for celebrities and socialites. Its European sophistication combined with an easy-going, laid-back lifestyle makes it the perfect place to truly “get away from it all” and enjoy yourself.

Here’s a first look at St. Barths– its past, its people, and its incredible allure for beach-loving travelers.

Although the island of St. Barthelemy was purportedly first discovered by Columbus 1493, today it is an overseas collectivity of France. However, it was actually under Swedish rule for a brief time after the Napoleonic Wars. In fact, it is the only Caribbean island to have been a Swedish colony.

The name of its capital city, Gustavia, comes from this Swedish past, and the three crowns, a Swedish symbol, remains on the country’s coat of arms. Nevertheless, there is little other evidence of the island’s time as a Swedish colony, except for a few notable traces in Gustavia, such as the Swedish clock tower and Swedish Jail. Today, the country’s culture is mainly French and Creole.

Who were the original inhabitants of St. Barths? History tells us that the Caribbean Taíno people lived on this island long before Christopher Columbus ever landed on its shores. The Taíno were divided into several main groups, and lived on various Caribbean islands.

When the island was settled by the French in 1648, other indigenous islanders called Caribs were living there. They resisted European takeover and destroyed the French settlement in 1654. However, Europeans continued to arrive, bringing African slaves with them.

As is the case with many other Caribbean islands, the population of St. Barths today is comprised mainly of European, Creole, African, and Mestizo ethnic groups. Since it is such a tiny island, only about 10,000 people live there.

How to get there

St. Barthelemy is located east of Puerto Rico, and south of St. Martin and Anguilla. It is considered a Caribbean island because it can be found in the Caribbean Sea. It is very small, and has an area of only 9.7 square miles. For this reason, it does not have an airport for commercial flights.

So, unless you’re able to charter a private airplane, you’ll need to fly to St. Martin. Book a flight to Princess Juliana International Airport and cross over to St. Barths by ferry (about 45 min ride). Or, you can also book a small plane with Winair or St. Barth Commute, which can take you to the island in about 15 minutes.

Tourists go to St. Barths mainly because it’s so exclusive and secluded. Even though it’s small in size, there’s no shortage of luxury resorts on the island. Better yet, there are plenty of private villas, where you can find a silent, peaceful escape and have the beach to yourself. In fact, visitors to St. Barths are more likely to stay in these private accomodations rather than hotels. 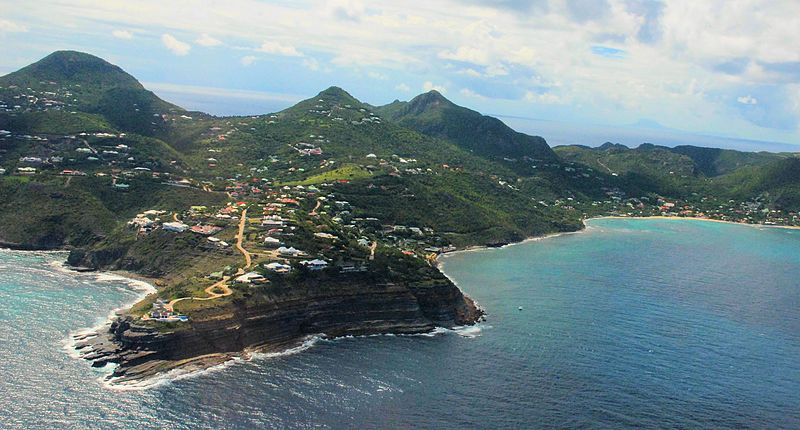 Of course, one of St. Barth’s main attractions is its beaches. There are about 20 of them in total, and most of them are secluded and “bare”– meaning they are mostly devoid of restaurants, bars, and street vendors peddling cheap souvenirs to tourists.

So you won’t find huge crowds on the beaches of this diminutive island paradise, but you will encounter plenty of soft, white sand. You’ll have plenty of opportunities to sunbathe in peace, or take the perfect selfie without any “photo-bombers”.

However, you should note that the fact that most of St. Barth’s beaches are very secluded also means that some of them are very hard to get to. For example, Colombier beach is only accessible by boat, or by way of a 30-minute hike.

Many beaches, such as Saline Beach, are known for being “top-optional” for women, although nudity is illegal on the island.

Shell Beach is famous for being replete with millions of tiny shells that seem to cover the entire beach. It is also a great place to snorkel and see tiny fish and coral. The waters are generally calm, so it is family friendly. However, you’ll want to wear water shoes or sandals to avoid being poked by jagged shell fragments as you explore this beach.

St. Barths is also home to a few historic sites, such as the Wall House museum, the St.Barth Municipal Museum, and the Swedish Clock Tower in Gustavia.

In addition, a hike to the top of Fort Karl will give you one of the best views on the island.

You’ll find the cuisine in St. Barth’s to be delightfully European and Creole. French restaurants are in the majority, but you can also find Asian, American, Spanish, and Italian options.

There are plenty of upscale dining establishments, frequently visited by the rich and famous, but that doesn’t mean you have eat out every day. You can visit a local supermarket and cook your own food, if you happen to be staying in a private villa or apartment.

Visiting an unfamiliar country can be difficult, but it doesn’t have to be that way. Keycaribe provides concierge services on St. Barths and on many other Caribbean islands. We’ll arrange your transportation, excursions, and even stock the kitchen of your private villa so that you can take advantage of every minute of your vacation.

Keycaribe can also provide professional makeup, photography, and catering for your special events, such as weddings, birthdays, and honeymoons. We’ll connect you with local planners and make your special day a breeze!

Heading to the Caribbean for a vacation? Not sure what to wear? Click here to find out how to look and feel your best while on vacation in the Caribbean.

8.2K
Travel
The Lost Islands of the Caribbean

8 Awesome Things to Do in St. Barths - Keycaribe Magazine Reply

[…] can assure you that there is, and a visit to St. Barths is well worth your time and money. Take a look at these 10 things to do in St. Barths, and […]