Soufriere Hills, a Caribbean volcano, is one of the most active volcanoes in the entire world.

Covering much of the southern half of the island, Soufriere has changed life in Montserrat drastically, ever since it awoke from its long slumber.

After being dormant for hundreds of years, the complex stratovolcano with many lava domes began to smoke and sputter on July 18th, 1995. Since then, it hasn’t ceased to send smoke, ash, pyroclastic flows and mudflows into the surrounding forests and beyond.

Now, you might wonder why anyone in their right mind would choose to live near an active volcano. The answer is: they didn’t. In the case of many citizens of Montserrat, their communities and homes were constructed long before Soufriere decided that it was done playing “sleeping beauty”.

In the shadow of a Caribbean volcano

No one ever imagined that a volcano that had been dormant for so long would ever become active again. For that reason, many villages and communities sprung up in Soufriere’s shadow. In fact, the capital of Montserrat, Plymouth, was located near the volcano as well.

Nevertheless, when the billowing smoke turned into a violent eruption in September 1996, the entire city of Plymouth and surrounding towns had to be evacuated. It was not the first time that the residents had been urged to flee, since the volcano had shown signs of life since 1995. And it would not be the last.

In just 20 minutes, lava and ash destroyed the villages of Morris and St. Patrick’s. Subsequent pyroclastic flows covered other towns over the course of several months. The volcanic activity did not slow down for about two years, culminating in a massive eruption on June 25th, 1997. This eruption took at least 19 lives and destroyed Montserrat’s airport.

By this time, the residents of Plymouth and many other towns had left their homes for good. The pyroclastic flow blanketed Plymouth in the course of just a few weeks. Black and gray ash floated through the air and settled on land and sea, darkening the sky and turning the sand on the beaches black.

Many residents relocated to nearby islands like Antigua and Barbuda. Around 7,000 people had left by the end of 1997, which was about a third of the island’s total population.

Volcanic activity still continues to this day, with the most recent eruption occurring in 2010. Needless to say, those who once lived in the towns nearest to Soufriere Hills have not moved back.

In fact, many zones in the south part of the island are prohibited for habitation due to the continuing threat of volcanic and seismic activity. However, people can visit these areas when the scientists who constantly monitor the volcano’s activity declare it to be safe.

Yet plenty of people still live on the island’s northern half, which has thankfully remained unscathed by Soufriere’s lava flows. Nevertheless, the volcano still touches their lives in a big way.

For example, every day at noon, sirens blare. However, they don’t wail in order to warn residents to pack their things and leave. They are simply being tested each day to ensure that they are still in working order, should they ever need to be used again. Residents are well aware that if they hear the sirens at any time other than 12 pm, it’s no longer a drill.

Another way in which this Caribbean volcano effects daily life in Montserrat is that it emits occasional clouds of steam and sulphur dioxide from its craters. They are a constant reminder that the sleeping monster could awaken at any time. However, since the zone within the volcano’s reach is now well-defined, no one lives there, and those who live outside this area are safe from any future pyroclastic flows.

Although this tiny island certainly suffered a great deal from large portions of it being burnt by lava and buried by mud and ash, Montserrat has come a long way from the devastation of 1997. Tourism is booming once again, and seeing Soufriere sputter and smoke is a tourist attraction in itself. Visitors who have witnessed the volcano steaming from afar have called the experience “enlightening and quite humbling as well”.

Another interesting aspect of visiting Montserrat involves the buried city of Plymouth. Today, what was once a bustling capital is an abandoned ghost town. Most of it is buried deep under mud and ash. For this reason, some have called Soufriere the “Pompeii of the Caribbean”.

You can now take “buried city tours” through the ruins. A knowledgeable guide may share personal stories of the eruptions of 1995-1997. You can see before and after photos of Plymouth and other towns. And, if you’re lucky, you may get to venture into the exclusion zone (with a tour or guide) and actually enter buildings that have remained untouched ever since they were covered in ash many years ago.

Another reminder of the volcano’s presence are the black sand beaches, which are common to volcanic islands around the world. A black sand beach is black because the sand there is composed volcanic minerals and lava fragments. Volcanic materials are always black or dark gray because they contain fragments of rocks like basalt and andesite, plus volcanic glass. Volcanic minerals like pyroxenes (mostly augite), amphiboles (mostly hornblende) and iron oxides (mostly magnetite) are also present.

Black sand beaches are beautiful and unique, but their sand is heavier than normal sand. It is also much hotter to the touch on sunny days. Montserrat has 8 black sand beaches that you can visit.

It may not be easy to live in the shadow of a Caribbean volcano, knowing that at any time, it may awaken from its slumber once again. Nevertheless, Montserrat’s residents now know better than to live their lives in close proximity to this magnificent, yet terrifying, natural wonder. 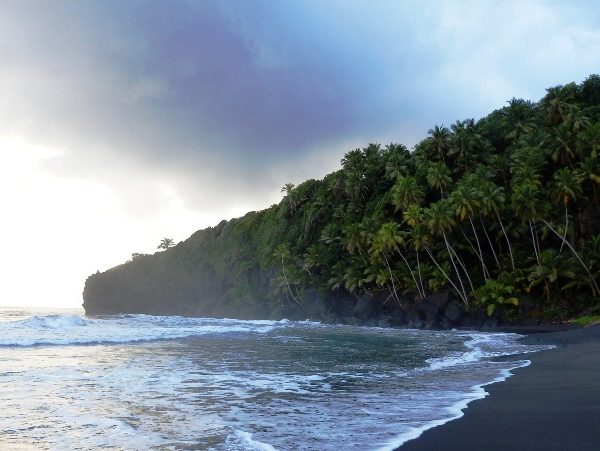