The 10 Best Places to Snorkel in the Caribbean

Whether you’re a self-proclaimed “mermaid”, or simply a marine life enthusiast, snorkeling in the ocean’s depths can be loads of fun. However, it’s only a great experience if there’s actually something to see in the water.

In addition, it’s important for the water to be nice and clear in order to appreciate the beautiful colors of the coral and tropical fish. Luckily, the Caribbean has plenty of clean, transparent water to facilitate snorkeling. A wide variety of marine species also qualifies the Caribbean Sea one of the best places on earth to snorkel and dive.

Read on to find out which 10 countries offer the best places to snorkel in the Caribbean!

Established in 1979, Bonaire Marine Park is now famous worldwide for its incredible expansive coral reef. It has over 6,700 acres of seagrass beds, mangroves, and coral clusters. The reef extends around the entire island, and you can reach it easily from the shallow waters near the shore.

What’s more, the park contains at least 340 species of fish! It’s also home to plenty of marine birds, such as pelicans, and flamingoes.

You won’t need a guide while snorkeling in Trunk Bay off the island of St. John. Handy underwater signs point out the different species of coral that grow there. You can follow the underwater trail for a total of 673 feet. Interestingly, the name “Trunk Bay” comes from the local word for the leatherback turtle. On St. John, these majestic creatures are often called “trunks”. They are endemic to the island, and can often be spotted in Trunk Bay.

Creole Rock in St. Martin is a site that you can easily spot because of its namesake, a giant rock protruding from the sea that is said to resemble an Amerindian man lying face up. The coral here is in great shape, and large schools of fish congregate near the famous rock. The only downside to this site is that it can be a little too popular during the tourist high season.

If you’re not so fond of stingrays, perhaps you’d rather skip this one. However, the giant rays here are actually tame and harmless. They’ll swim calmly to and fro by your side through the warm turquoise waters. It can actually be quite a relaxing experience. If you do decide to visit the famous “stingray city”, it will be an adventure that you’ll never forget.

Ranked as one of the Caribbean’s best marine reserves on TripAdvisor.com, Curacao Underwater Marine Park in Curacao offers a remarkable dive and snorkeling experience for adults and kids alike. There’s also an aquarium, dolphin show, sea lion show, and more to delight families after they’ve explored the reefs.

Near the town of Fajardo, Puerto Rico lies Cayo Diablo National Park. Apart from coral and fish, this park’s claim to fame is its giant sea turtles. Both hawksbill and green turtles call Cayo Diablo home. So, the next time you’re in Puerto Rico, don’t miss this chance to swim with these gentle creatures.

There are many great places to go snorkeling in Antigua, namely Cades Reef and Paradise Reef. However, those two sites are not accessible from the shore. You’ll need to charter a boat to reach them. Therefore, Darkwood Beach is probably a better choice, especially if for beginners. It’s a well-rounded beach. Besides featuring colorful fish and coral, it also has a floating water park for kids and amenities like chairs, umbrellas, and equipment for water sport.

Isla Mujeres, a tiny island off Mexico’s Caribbean coast, boasts a very large attraction: you can swim with whale sharks! They can grow up to 60 feet in length. These giants inhabit the warm waters near the Yucatan Peninsula from June to August. You may also catch a glimpse of a dolphin or manta ray as well.

In addition, you can also visit the underwater museum of art, or MUSA (acronym for its original Spanish name). It consists mainly of large statues and other sculptures by at least six different artists. The collection, which is accessible only through snorkeling, features over 500 pieces.

Besides being a stunning location in general, Anse Chastanet in the Caribbean island of St. Lucia is also one of the best places to snorkel in the Caribbean. You can easily access the coral reefs right off Anse Chastanet beach. Scuba divers also love this location because of its breathtaking views both under and over the waves.

Belize has long been known for its incredible dive locations, such as the Belize Blue Hole. However, Glover’s Reef is accessible even for amateur snorkelers. The variety and sheer quantity of colorful marine life is incredible. In addition, it’s possible to see dolphins and whale sharks too!

Even though it’s number 10 on our list of the best places to snorkel in the Caribbean, Glover’s Reef is actually just as great, if not better, than our number one pick! Part of the reason why the coral and fish there are so healthy is because Belize has made a great effort to conserve and protect the country’s many coral reefs.

Ready to take the ultimate Caribbean snorkeling trip? Book your perfect private accommodations with KeyCaribe and make your dream vacation a reality! 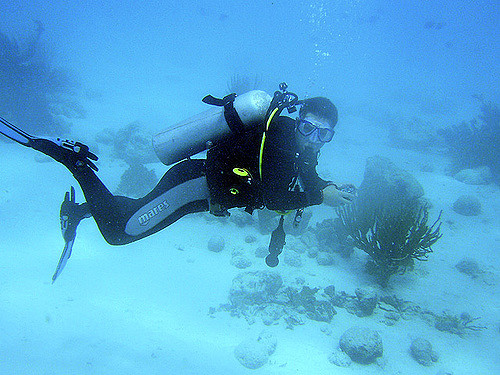 7.9K
Experience
Why Bonaire is a True Diver’s Paradise