At Maho Beach, airplanes pass mere feet over the heads of beachgoers before landing on runway 10 at Princess Juliana International Airport.

In other circumstances, you would call an airplane flying just a few feet overhead a “close call”. However, thousands of tourists see it as an opportunity to snap a pic and feel a powerful jet blast. They’re flocking to Maho beach to test their luck (and their camera skills) as they wait to catch a glimpse of a low-flying plane up close.

Because of this, Maho beach just might be one of the most dangerous beaches in the entire world. It’s a far cry from the quiet, serene beaches typical of the Caribbean islands. Maho is noisy and generally crowded. Nevertheless, thrill-seekers find it to be one of the coolest experiences they’ll experience in their lifetime.

Where is Maho Beach?

Maho Beach is located on the island of Saint Martin, near Simpson Bay in Sint Maarten, the Dutch side of the island. Since it’s located right beside an airport runway at Princess Juliana International airport, airplane sightings are quite frequent. It is one of the few places in the world where plane spotters can get so close to aircraft as the take off or touch down.

The sand on Maho beach is white, and there are no plants thanks to jet blast erosion.

Before an airport sprung up nearby, Maho Beach was a typical Caribbean beach. However, in 1942, the United States built a tiny military airstrip, which later handled commercial flights in 1943. After Dutch Crown Princess Juliana landed there in 1944, the airport was named after her. Since then, the terminal buildings have been expanded and remodeled several times. Unfortunately, Hurricane Irma caused heavy damage to many of the buildings and jetways in 2017, but repairs have since been completed.

Aircraft in their final approach pass over Maho Beach at altitudes of less than 100 feet from the ground. Although there is technically no danger of a plane actually hitting a bystander, jet blast has the potential to knock people into the water. For this reason, signs have been placed nearby to warn people of the danger, and several fences are in place to prevent them from getting too close to the runway.

Although very few injuries have occurred at Maho beach, some tourists have reportedly exhibited dangerous behavior, such as hanging on to the fence at the end of the runaway. A photo posted to Instagram (the picture that opens this article) by a pair of daredevil tourists sparked some heated criticism recently. The two people in the photo, Oleg Kolisnichenko, 36, and Yuliia Nos, 25, are both circus formers from Kiev. Yuliia balanced herself on Oleg’s head in the photo, her feet appearing dangerously close to a passing airplane. St Maarten Tourist bureau director Rolando Brison called the stunt “extremely dangerous.”

Unfortunately, there has been one tragedy at Maho Beach. In 2017, a 57-year-old tourist from New Zealand was killed after a jet blast knocked her into the concrete. After this incident, the government placed an additional fence on the beach to keep people from getting too close. 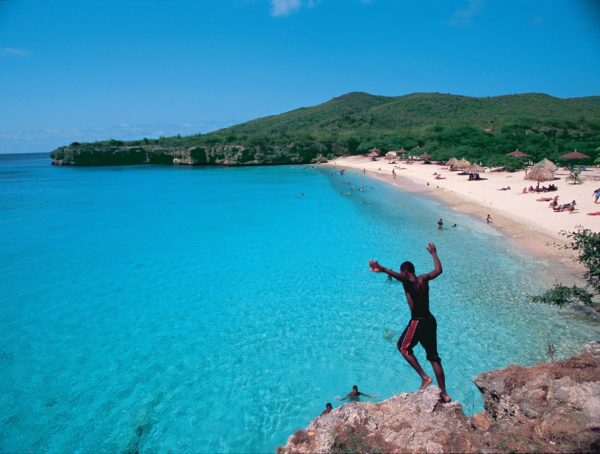 Although very few injuries have occurred at Maho beach, some tourists have reportedly exhibited dangerous behavior, such as hanging on to the fence at the end of the runaway.