Happy Island: The Island Made of Seashells

Just a few hundred meters from Union Island in St. Vincent and the Grenadines, there’s a tiny, strange-looking island with nothing on it but a small home, a beach bar, and a few palm trees. It’s called Happy Island, and it was made entirely out of conch shells.

The tiny atoll was the brainchild of Janti, a former volunteer environmental officer. Tasked with collecting thousands of discarded conch shells left by fishermen, he realized that there really wasn’t any place to get rid of them. So, he decided to recycle them!

First, Janti collected thousands of the shells, which had been left all over the beaches of Union Island. Fisherman harvest the muscles inside to sell for food, but many do not discard the shells properly. That’s why they end up crowding the beaches of St. Vincent and the Grenadines.

Next, Janti chose the perfect spot in the sea to build his island– in front of a natural coral barrier. This would protect his creation from the wind and waves of the open sea. Waves would break on the barrier before hitting his island.

Finally, Janti began to pile the conch shells in the ocean, one by one. Before long, he had accumulated enough to break the surface of the shallow sea. At this point, he poured cement over the shells to mould them together. Voila! An island made of shells!

Janti didn’t spend so much time and effort building his island for it to just be a decoration in the middle of the Caribbean Sea. No, his ultimate purpose was to start a business! He built a tiny bar on top of the island and opened it up to the public in 2002.

Each year, he continued to add more and more conch shells to the island to make it even bigger! And, as the island grew, so did business at the bar.

Today, the Happy Island Bar is famous all over the Caribbean, and Janti still serves drinks there. “I’m making life in the Caribbean worth it,” he told some tourists in an interview, “living like an aristocrat.”

After being asked why he’s so happy, he responded simply, “Because I’ve established my independence, and freed myself from stress.”

To visit Happy Island, you’ll need to charter a boat (unless you want to swim there!) Goats on the Road suggests speaking with Marius at Kings Landing Hotel to set you up with a boat. There are plenty of tables and benches for guests to use while they relax with a cold drink in hand under the Caribbean sun.

Ready to plan your Caribbean getaway? Here are some awesome travel tips!

How to Take a Plastic-Free Vacation

8 Common Caribbean Travel Scams and How to Avoid Them

How to Add a Little Luxury to Your Caribbean Vacation

7.1K
Travel
Canouan: Where the Billionaires Go to Escape the Millionaires 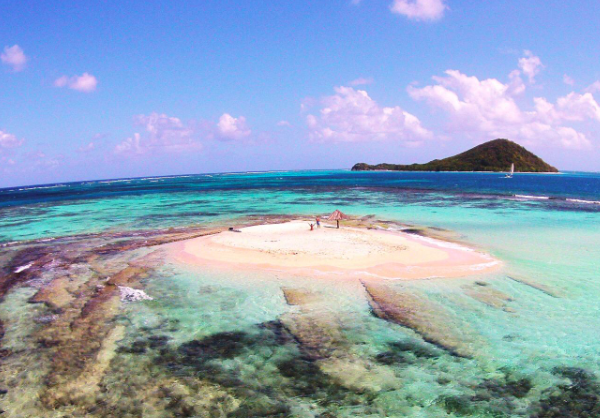 7.8K
Experience
Mopion: Own a Private Caribbean Island for a Day