Say goodbye to boots and hats, and hello to sandals and sunglasses. In the Caribbean, New Year’s Eve is celebrated with fun in the sun and a bottle of rum. Grab your friends and family and head to one of these islands for some last-day-of-the-year revelry before you make those solemn New Year’s resolutions!

That’s right, on this night, you’re not allowed to worry about the rules you might set for yourself (and then break) during the new year. The No Resolutions Party in Grand Cayman begins at 6 pm at the Camana Bay complex. Enjoy music, food, and fireworks, as well as dancing that goes past 1 am. There are two fireworks shows, normally at 7 pm and midnight.

Montserrat may be a tiny island, but locals know how to celebrate big. Jump Up is an island-wide celebration that runs from December 23rd to January 1st. The festival includes music parties, costumed dancers in lively parades, pageants, and a Calypso King competition. On January 1st, known as Jump Up day, the country celebrates emancipation with an elaborate parade, dancing, and steel drum bands.

Onions have always been an important part of Bermuda’s culture. Since these vegetables grow extremely well on the island’s soil, they’ve been a staple crop for hundreds of years. But you may be surprised to hear that the country’s New Year celebration involves “dropping” a giant onion, similar to the ball drop in Times Square. In the city of St. George, revelers enjoy great food and music while they wait for the big moment. At midnight, a gigantic paper-mache onion covered in lights descends from the roof of the town hall. Afterwards, fireworks light up the night sky.

What better place to celebrate the arrival of a New Year than in Barbados, the party island? In this tropical island country, locals refer to New Year’s Eve as “Old Year’s Night”.

Head to the island’s southern coast to watch fireworks fill the sky with light near the Hilton Hotel Resort. Or, if you’re staying on the West coast, you can attend a pyrotechnics show near the Sandy Lane area,  the Mango Bay Resort, or Carlisle Bay in Bridgetown.

In addition, the cruising club at Carlisle Bay throws an annual Old Year’s Night party. Go for the music and food, and stay for the fireworks display nearby!

A “Foxy” party in the BVI

Join the Old Year’s Eve party at Foxy’s Tamarind Bar on the tiny island of Jost Van Dyke in the British Virgin islands. The lively shindig has been consistently ranked as one of the 5 best places to celebrate the New Year in the world. Each year’s party has a theme, and guests come dressed in costume to enjoy barbecued lobster, beach dancing, and even a foam pit. Sometimes, celebrities sail in to join the fun, too! The island’s normally small population of around 300 grows to thousands for one unforgettable night.

Countdown on the Malecón, Dominican Republic

In Santo Domingo, the capital city of the Dominican Republic, locals and tourists alike flock to the waterfront, known as the “malecón” for food, fun, and fireworks. In addition, the annual celebration includes live concerts with Dominican artists. At midnight, fireworks explode over the Caribbean Sea, ringing in the New Year with a bang!

St. Barts (or St. Barths), known for its luxury appeal, attracts hundreds of celebrities during the holiday season. They host private parties at villas, restaurants, and yachts. Some recent New Years guests to the island include Leonardo DiCaprio, Paul McCartney, and Russell Simmons. Even if you don’t have an invite to one of those exclusive gatherings, you can always hit up a public party at one of St. Bart’s many fine dining establishments. Or, you can rent a private villa and host a memorable New Year’s bash of your own!

Heading to the Caribbean for the holidays? Here are some more helpful tips from Key Caribe: 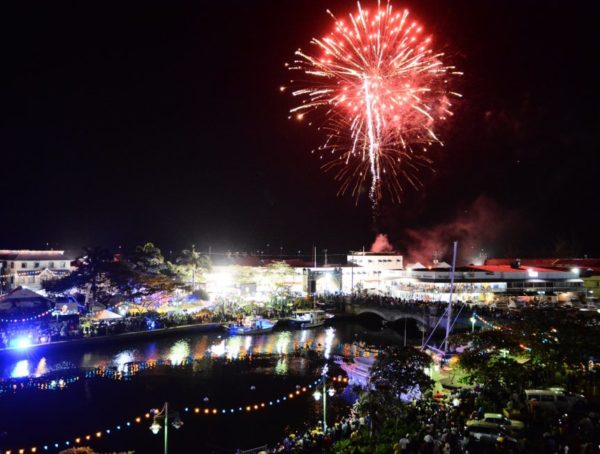