“I’m dreaming of a white Christmas…”

Who hasn’t sung Bing Crosby’s popular tune and not thought of snow? Probably no one– but if you spend your Christmas season in the Caribbean, you’ll experience a whole new type of white Christmas. However, it will involve frolicking on warm, powdery white sand instead of cold, wet snow crystals.

Christmas in the Caribbean is celebrated in much the same way as in Europe or North America. Many households put up twinkling Christmas lights and cheerful Christmas lawn decor. Gift-giving is a staple, and the ample spread of delicious food for Christmas dinner is an absolute must.

However, instead of snow, there’s sand. And instead of ice, there’s the warm Caribbean breeze. In addition, many families in Caribbean countries celebrate Christmas differently.

The islands and countries surrounded by the Caribbean Sea add a different flavor and flare to the holiday season. Each country or territory has its own unique traditions, passed down from generation to generation. Some are changed by time and the advent of new technology. Others remain just the same as when they began.

Not all of these Caribbean Christmas traditions have to do with the traditional Christian holiday celebrated on December 25th. Some involve the days before and after Christmas, such as the “Día de los Reyes” celebrations that take place in countries like Puerto Rico and the Dominican Republic on January 6th.

Nonetheless, what all these Caribbean Christmas traditions have in common is that they are unique, and full of meaning. In every country, Christmas is a time to celebrate home, family, and love.

No matter which Caribbean country you travel to, you’ll find Caribbean hospitality to be incredibly heartwarming.  So why not travel to the Caribbean this winter, and experience these unique traditions for yourself?

Long ago, settlers from Venezuela brought Gaita music to Aruba. Today, they have given it their own flavor, and have made it part of their Christmas celebrations. A typical Gaita band consists of female singers, and a lineup of musicians that play instruments like the base, furuku, cuarta, piano, and tambu.

These bands travel throughout the island as early as October to get Arubans ready for the Christmas season. Meanwhile, many islanders are hard at work in their homes, making traditional ayacas. Also from Venezuela, ayacas (or, hallacas) are similar to tamales. They are made with a cornmeal dough that is stuffed with season chicken, ham, or pork. Each ayaca is then boiled or steamed individually in a piece of banana leaf. The result is a delicious marriage of flavors in one compact packet.

Christmas in Puerto Rico lasts from the beginning of December, and well into mid-January. As soon as Christmas decorations start popping up in stores, groups of people get together to form parrandas, which is the Puerto-Rican version of caroling. These groups can be from churches, schools, families, etc.

The parrandas usually plan their routes in advance, and visit the homes of people they know. They arrive on their door steps late at night, surprising the occupants with some spirited singing. In addition, they often play traditional Puerto Rican instruments like the cuatro and guiro. However, the fun is just getting started! After singing, their hosts will normally invite them in for some traditional snacks. Sometimes they’ll stay there, other times, they’ll stay for a while and then move on to the next house.

Three King’s Day commemorates the Christian belief that three (or more) “kings” or wise men visited Jesus sometime after he was born. This is why the festival falls on a date so close to Christmas.

Also known as the Epiphany, or Little Christmas, this holiday is celebrated by many countries all over the world. However, many Caribbean countries celebrate it even more than Christmas!

Families or friends usually share a circular cake with a tiny plastic doll representing baby Jesus inside. Whoever gets “baby Jesus” in his or her slice of cake must host a dinner party for Candelaria, a Catholic holiday in February. 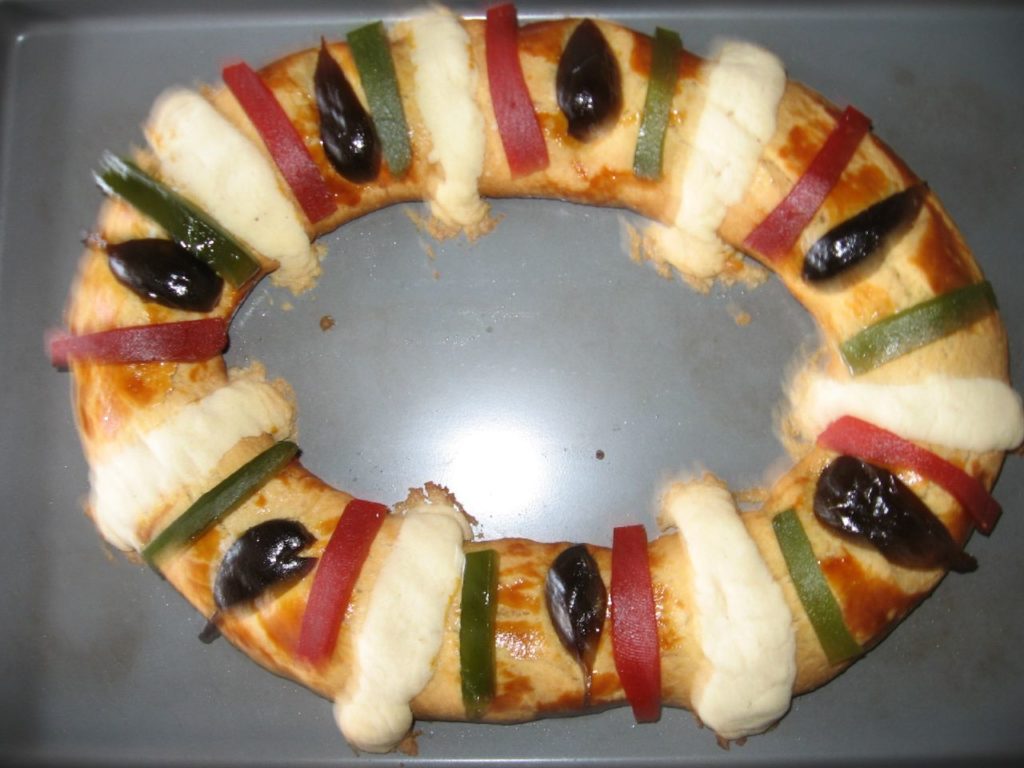 The exact shape of the cake varies from country to country. Generally, it is supposed to represent a king’s crown. In some places, bakers replace the doll with an almond or other nut. In Puerto Rico and a few other Caribbean countries, children often leave out a box of hay or grass for the king’s camels, along with a dish of water. You could compare this to the American tradition of leaving out cookies and milk for Santa Claus.

Contrary to popular thought, Boxing Day doesn’t have anything to do with boxing.

Long ago in England, employers used to gift their employees boxes filled with presents on December 26th. Another version of this tradition is that English children used to “box up” old toys that they no longer wanted, and give them to poor children or servants who lived in their households.

Now known as Boxing Day, some Caribbean islands with strong British heritage still carry on the tradition. In Barbados, many people deliver boxes of gifts to friends and family on December 26th. Some no longer give gifts on this day, but it’s still a public holiday in many English-speaking Caribbean countries. That gives them the chance to visit friends and relatives.

Experience Caribbean Christmas traditions for yourself

Ready to exchange the ice and snow for sun and sand? Why not spend Christmas on the beach for a change? Let KeyCaribe help you make your holiday dreams come true with luxury accommodations and exclusive concierge services.

5.8K
Events
9 Things to Do for Christmas in the Caribbean